The ultimate guide to the beer gardens of Bavaria

There’s nothing more Bavarian than relaxing in a shady beer garden on a hot summer’s day, a cool beer in hand. At the first glimmer of sunshine, locals flock to lap up the sun, food and drink in these little slices of outdoor paradise, where you can easily wile away a few hours of your time. Beer gardens are undoubtedly a cultural institution here, but in recent decades their popularity has exploded beyond Germany, and they are now found the world over. So why not come and experience beer gardens in the place where they first started? Wondering where to go, and what to order in a Bavarian beer garden? Here are our top tips and handy guide to some of the best beer gardens in the region. Prost! 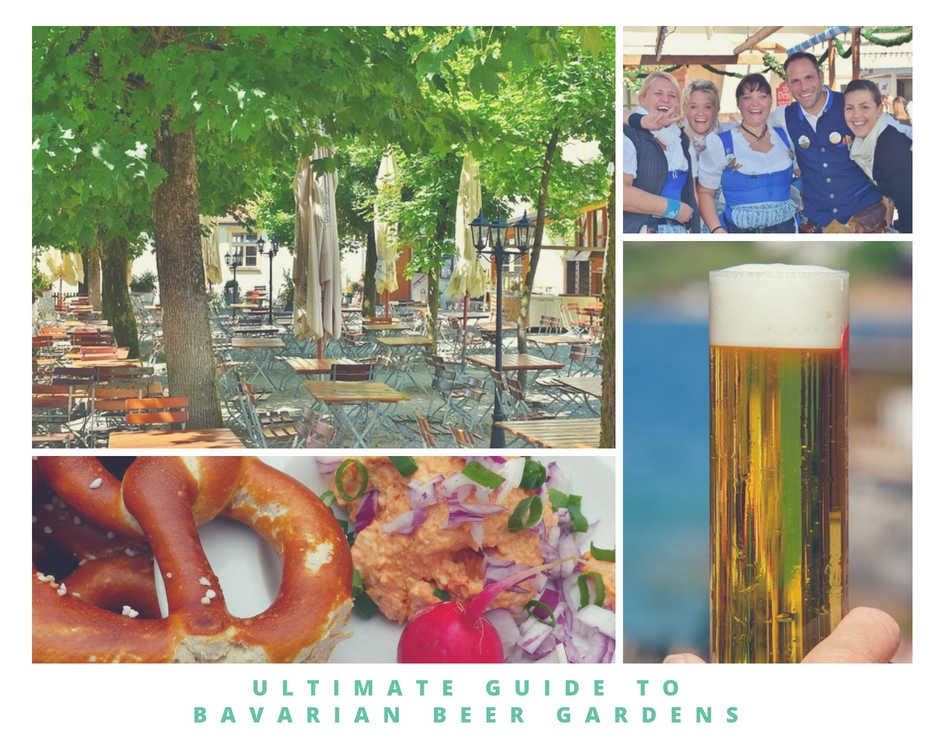 Things to know before you go

You might think that the idea of sitting in the sunshine with a cool beer, under the shade of tall trees is such a good one, that the tradition requires no explanation. But the story behind it is actually fascinating. Beer gardens came about at a time when brewing was banned during the summer months due to the increased fire risk. Brewers, who knew that beer is a thing best served cold, began to look for ways to keep their beer cool until the summer months hit. They dug out cellars deep underground, often near the banks of the Isar river in Munich, where the soil was coolest. Chestnut trees were planted above to provide extra shade. When customers stopped by, they found that sitting under the trees was the best place to consume their purchases. Brewers put out benches to draw in more custom, and the concept quickly caught on. Fast-forward to the present day, and there are now over 200 beer gardens in Munich, capable of seating up to 180,000 people. Hirschgarten should probably claim the title of the world’s largest, seating a whopping 8,000 people. Traditionally, beer is served out of wooden barrels into a Maß – a litre sized beer glass. There’ll often be a deposit charged per glass, so don’t forget to ask for it back at the end. 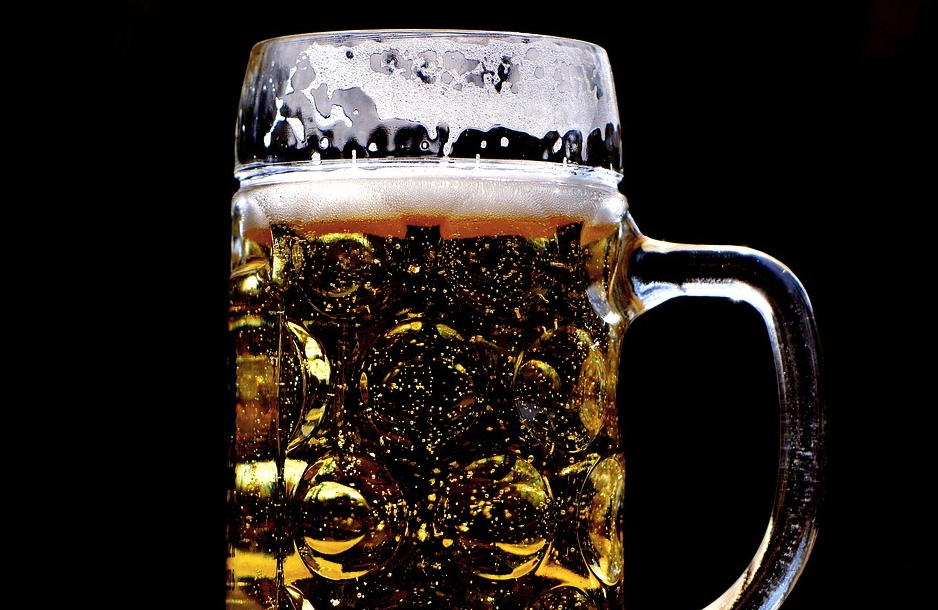 Figure 2: Quenching your thirst in Bavaria is entrenched in the region’s culture. Credit: Pixabay

Quenching your thirst with Bavarian beers

Beer is a subject that the Germans take very seriously indeed. In fact, a purity law, specifying the only ingredients permitted in beer (water, barley and hops), was passed as long ago as 1516. Centuries of experience means that arguably some of the best beers worldwide call Bavaria their home. Not sure what to order? Helles, or light beer, is clear, gold colour, crisp and dry to the taste. Bockbier is strong, with an alcohol percentage ranging from 6-18 percent. It’s often brewed over the festive period. Weissbier is the only beer served in a half litre glass. Made from wheat, it comes either in a light, dark or even alcohol-free version. If you fancy your beer, well a bit less beery, try a Radler- a half-beer, half-lemonade mix. Some would consider this sacrilege, though (as they should).

Bavarian food to indulge in

A little-known fact is that a ‘real’ beer garden will allow visitors to bring their own food (you can never bring your own beer, though!). Bavarian cooking is hearty, comforting and… well, pretty meat-heavy, though there’ll be some tasty side dishes and homemade breads and pretzels for the meat-free crowd. So what food can you expect to see on a Bavarian menu? Weisswurst are popular - these are veal and pork sausages made with onions and fresh parsley, served with a sweet, grainy mustard and an oversized pretzel. Weisswurst is a traditional Munich delicacy, but local legend says that it’s bad luck to consume them after midday, although that adage probably no longer holds true, thanks to advances in refrigeration techniques. Wurst is no joking matter for the Germans - there’s even a sausage control board which sets out the percentages of ingredients they should contain. If it’s just a snack you are after, order some Obazda, it’s served with bread and has a dip-like consistency. It’s made with camembert cheese, paprika, onion and butter. If you crave something a bit more substantial, order a Halbes Hendl, which is half a barbequed chicken, it’ll be served uncarved, so prepare to get messy. Other soul pleasing, comfort foods include Schweinshax'n – roasted pork knuckle, often served with pickled sauerkraut and stodgy potato dumplings.

Foodies might be overwhelmed at first by the sheer number of beer gardens in Munich and the surrounds. Reassuringly, it’s actually hard to go wrong, as most serve delicious, home-made Bavarian food, but if you are after culinary perfection, here are some of our top tips. 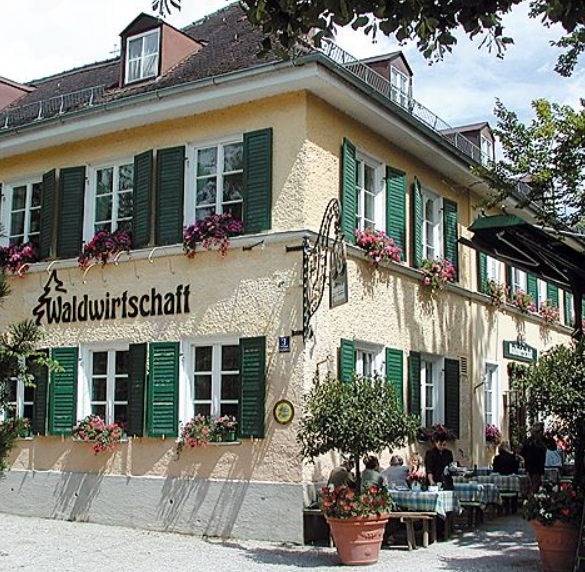 This restaurant offers a sophisticated take on Bavarian specialities. Starters include either veal or ox loin tartare, and specialities for mains include crispy roast pork or duck. Not only is this beer garden famed for its food, it’s also a very popular destination for leisure cyclists at the weekends. It’s a charming bike ride down the Isar from Munich and there’s a large outdoor bicycle parking area at the beer garden. 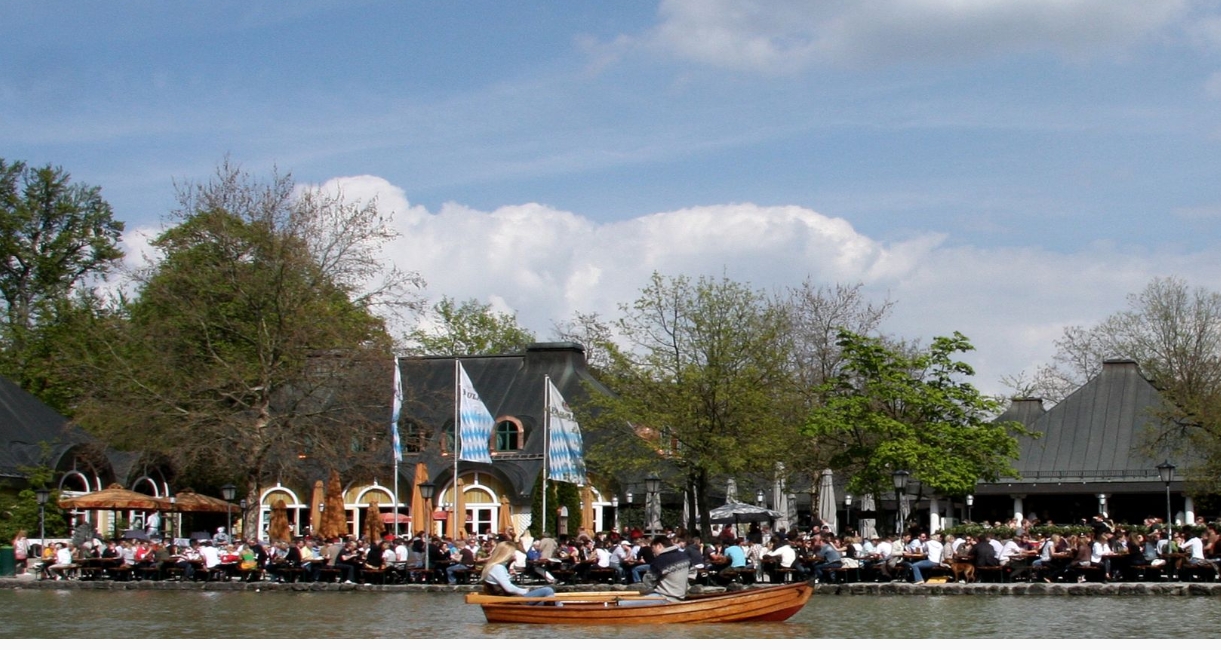 Figure 4: Beer garden by the lake in the English gardens. Watch the boats go by from the terrace. Credit.kuffler.de/en

Seehaus is one of four beer gardens in the English gardens. The restaurant offers more international dishes alongside Bavarian staples. Seafood is a speciality here. Try a whole roasted seabass with provençale vegetables, or fillet of char served with chanterelles mushrooms and elderflower oil. They also cater for vegetarians and vegans (which is fairly unusual in terms of beer garden cuisine). Located right on the lake, next to the paddle boat rental, it’s a perfect place to spend a lazy Saturday or Sunday.

Figure 5: The outside beer garden terrace at the Gutshofmentnerschwaige. Credit: menterschwaige.de

Fresh and locally sourced ingredients form the basis of food here, where international dishes are served alongside traditional Bavarian fare. In asparagus season (a true culinary celebration), they offer a range of themed dishes, or try strips of calf heart, fried with mustard sauce. There’s also Wiener Schnitzel and crispy Bavarian duck on the menu.

Beer gardens in Germany offer a relaxed, family-friendly atmosphere, meaning there’s no reason to leave the kids at home if you are craving a Weissbier. Although children are universally welcomed, some cater better for kids than others in terms of the facilities they offer. Due to the park locations of many beer gardens, a number of them do have playgrounds (spielplätze) for kids, but here are some of our favourites which are worth a visit if you have the little ones in tow. 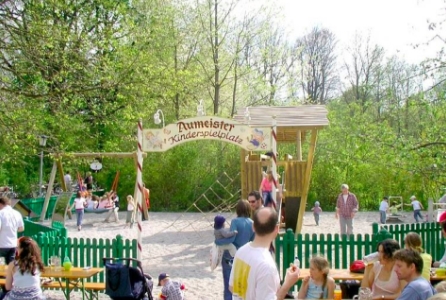 A large and traditional beer garden with an extensive playground. Have a cool beer while the little ones wear themselves out on the climbing frames and slide. Even better, the playground is completely visible from the beer garden tables. On Sundays there’s also face-painting for children. 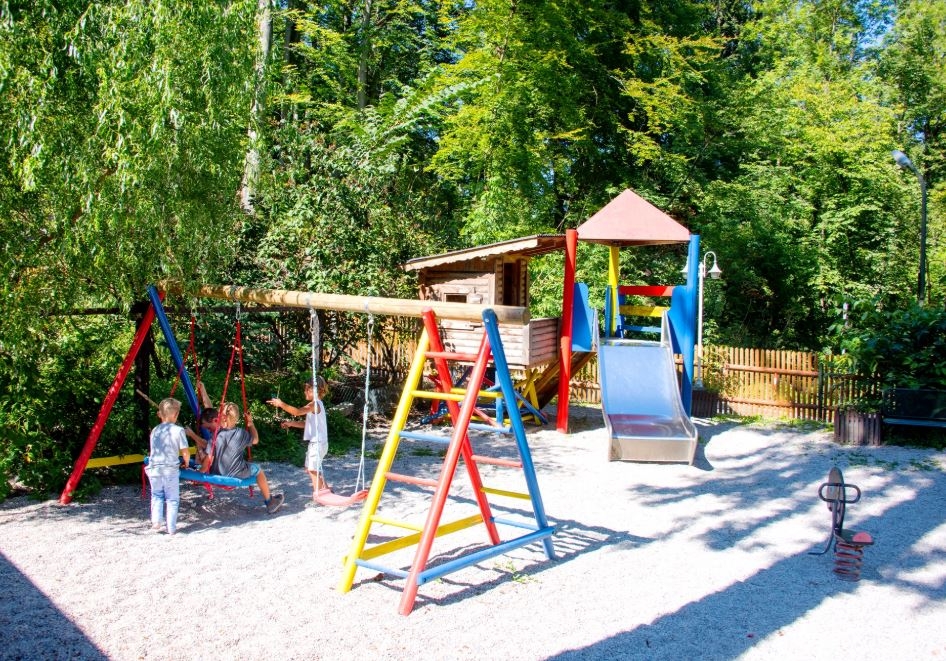 Situated directly on the Isar river and surrounded by old chestnut trees, this 1,000-seater beer garden has two excellent playgrounds with slides, climbing frames, trampolines and a sand pit. It’s perfectly set up for keeping kids out of mischief and allowing adults to savour some German cuisine (and drinks) in peace. Either order traditional food off the varied menu or bring your own picnic. The clientele is varied and lively. 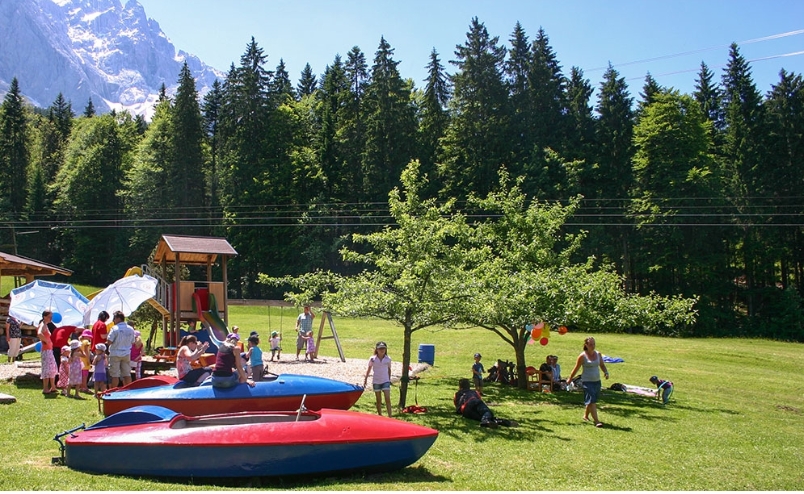 The Alm am Eibsee near Garmisch Partenkirchen combines heavenly panoramic views with an adventure playground for children. Watch from the terrace as your kids climb in and explore the boats, tractors, climbing frame and slides. Make it a family day out with a post-lunch dip in the emerald green waters of the Eibsee lake or admire views of the lake and valley from one of the many local hiking trails.

Although traditional beer gardens with Bavarian décor, wooden benches and old chestnut trees are undoubtedly beautiful, if you want to take German scenery to another level, one option is to head up to the mountains. Take a day trip to Garmisch-Partenkirchen, a picturesque alpine sports resort which rose to prominence after it was used as a venue for the Winter Olympics over 70 years ago. Cold beer tastes even better in the fresh mountain air.

Figure 9: Friends enjoying beers on a terrace, set up high in the mountains with a panoramic view, Credit: berggasthof-panorama.de

Lap up the views from the charming sun terrace, which seats up to 140 guests. This guesthouse, which also offers lodging in its upmarket rooms, has an enviable mountain location, and boasts views over the town of Garmisch Partenkirchen and the stunning mountains which surround it. Try ‘gebratene Forelle’, local grilled trout with salted potatoes, or ‘Kalbshaxe mit Knödel’ - veal shank with dumplings to accompany your beer. 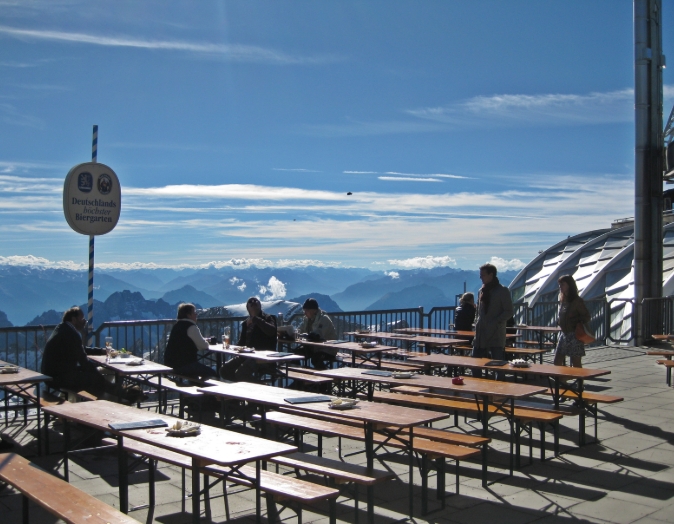 If it’s panoramic views you are after as you cradle your cool Bavarian beer, it’s hard to beat the scenic sun terrace at the summit of Germany’s highest mountain, the Zugspitze, 2,962 metres above sea level. Take the historic cog railway, or the aerial cable car, and don’t forget your camera. In clear weather, you’ll be able to gaze in wonder at 400 other mountain peaks nearby. On that note, it’s best to check the local weather forecast carefully and to plan your visit accordingly, as clouds can descend fast at these altitudes. Not to worry they do, you can always retreat inside the restaurant and warm up with mulled wine, hot chocolate or apfelstrudel. 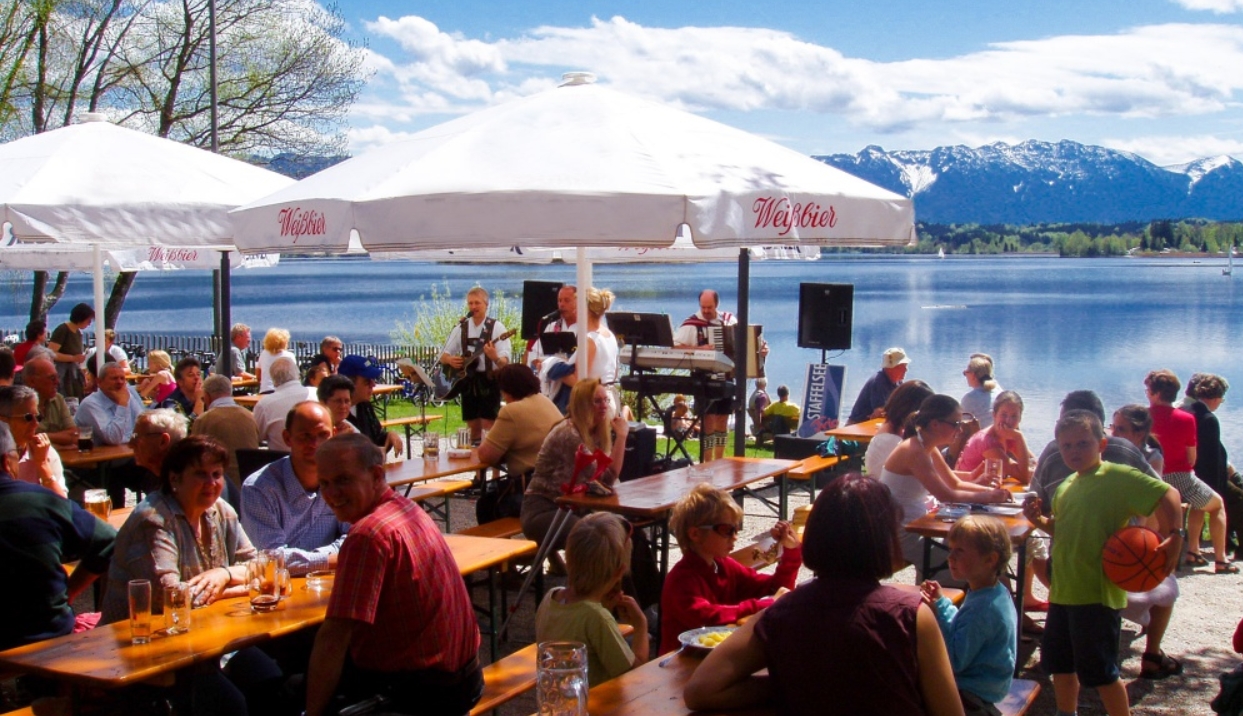 Figure 11:  Beer garden in the sunshine by a lake, with a panoramic mountain view in the background. Credit: seerestaurant-alpenblick.de

With views to lose yourself in a dreamy daze, across the lake to the snow-capped alps, you won’t ever want to leave this little square of paradise on earth. The official website even has a livestream webcam, so you can check out the current weather. It’s a great place to unwind after a swimming or boating trip.

The MVG in Munich has added another mode of transportation to its pre-existing offering, which alrea...