From Tuscany to tiny Molise, the central part of Italy is blessed with exceptional beauty. Here are six regions with their most spending little borgoes and six mouth-watering dishes to tantaslise the tastebuds. 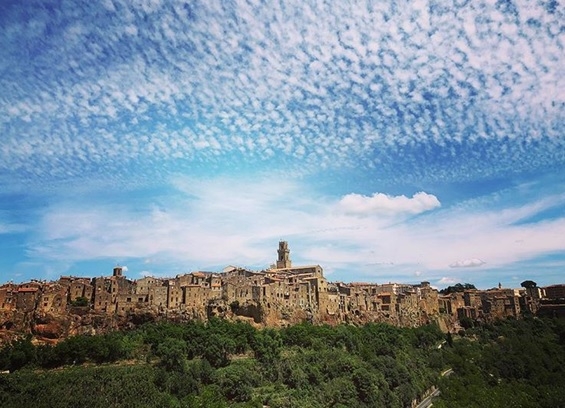 The green valleys of the Maremma area frame this little village of Etruscan origin, suspended on a tuff of cliff shaped like a half-moon. Here, in the 15th century, a very active Jewish community settled in, which is why the village is often named ‘the small Jerusalem’. It is worth visiting the ghetto, the synagogue, the Jewish cemetery and the Kasher. In addition to the renowned wineries where the Bianco di Pitigliano wine is left to age, there are the Etruscan tombs.

The Sfratto dei Goym is entrenched in history. It takes its origins from the 1600s, namely the eviction of the Jewish population of Pitigliano from their homes under the decision of Cosimo II de Medici, who wanted to transfer them to a single district. A herald went knocking at their doors with a cane, the shape of which was the inspiration for the thin biscuit filled with walnuts, honey, orange skin and nutmeg. 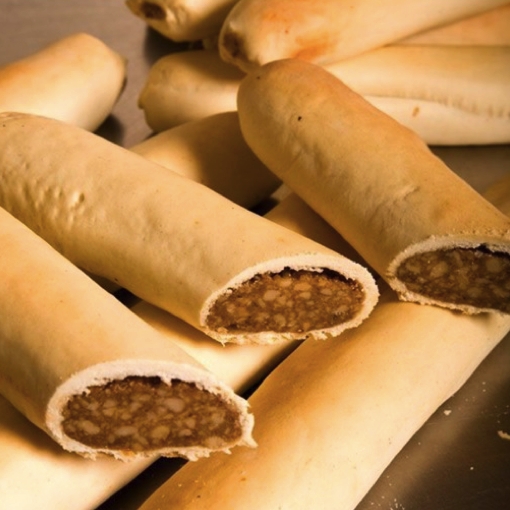 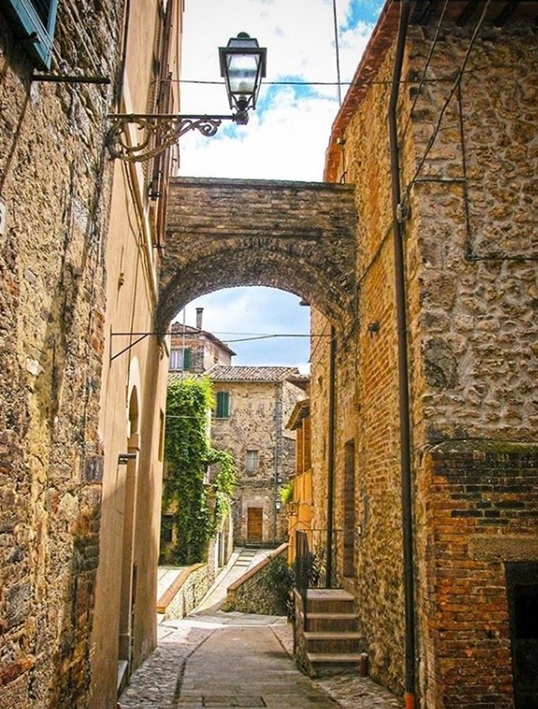 This village is in the one of the ‘most beautiful borghi of Italy’ club thanks to its historic monuments, enchanting square and small streets that show the prowess of 16th and 17th century architecture and infrastructure. Acquasparta is an exceptional culinary destination too; the entire Umbria region is a haven for local productions, with specialties such as the Norcia truffle, Castelluccio lentils and the local ham.

Among the delicious plates you can taste here is the truffle strangozzi. This is a homemade pasta with a long shape, seasoned with a dust of Norcia black truffle. This dish enhances the taste of this precious product that grows in the mountainous and hilly areas of Umbria. 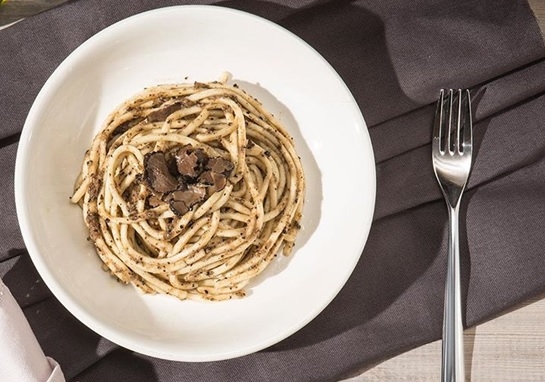 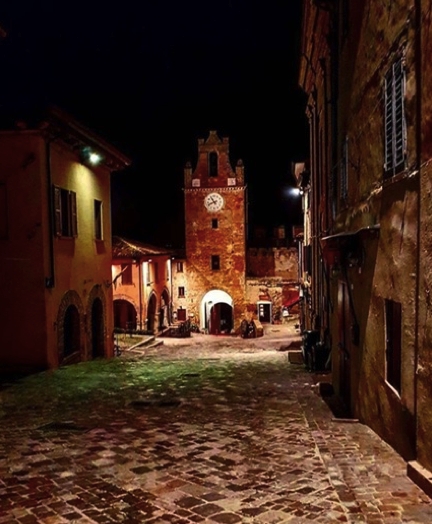 This village is in the hinterland of the Adriatic Riviera, at the border between Marche and Emilia Romagna. The Gradara Fortress dominates the valley and is surrounded by strong fortifications that make it one of the biggest examples of medieval Italian architecture. Legend goes that within the castle occurred the tragedy of Paolo and Francesca, as recounted in the Divina Commedia by Dante Alighieri. The two famous lovers were killed by Francesca’s husband in 1289 and forever immortalised in these words: ‘Amor ch’a nullo amato amar perdona’ (love which pardons no one loved from loving), and is learnt by all Italian pupils at school. Today, it is possible to visit the castle and it is symbol of romanticism, strength of love.

Tagliolini con la bomba (with the bomb) is a humble dish of local tradition. The tagliolini are cooked in broth and only partially drained, seasoned with sautéed onion and pancetta. It is called ‘with the bomb’ because it is the effect obtained by pouring boiling hot oil in water, createing a big steam cloud. 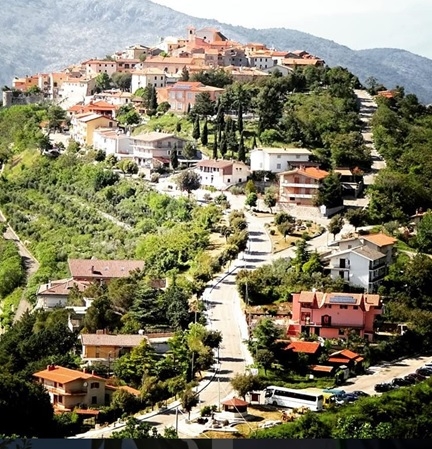 Campodimele is a small village in the middle of the National Park of Monti Aurunci, known as the ‘longevity’ village. The centre preserves the ancient medieval structure developed on the extremity of a steep hill on the Valle del Liri. Here, you can walk the Love Trail on the ancient path along the walls that protected the citadel.

A delectable traditional dish is the ciammotte ammuccate, traditionally prepared for the celebration of Sant’Onofrio fair, on June 12. The ciammotte are snails typical of the mountains that are cooked and served in a sauce made of wild mint and aromatic herbs with garlic, oil and hot pepper. 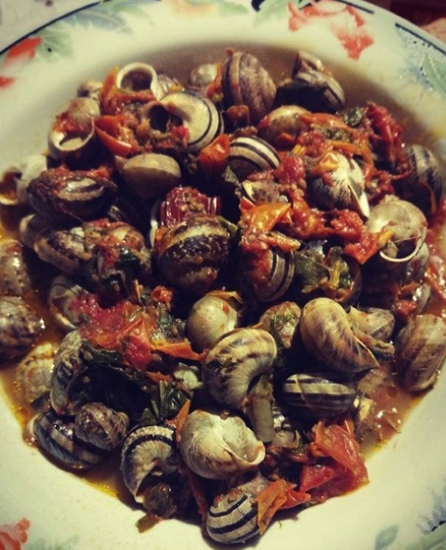 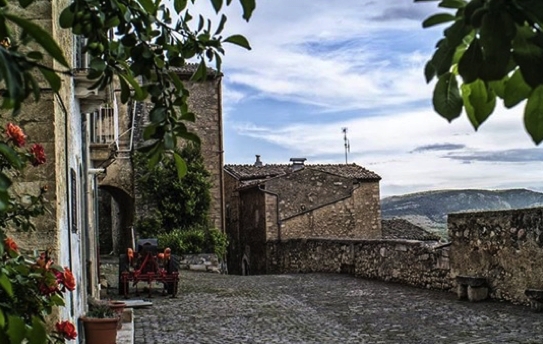 With its houses on the rock, the village dominates the plain from which it takes the name. The origins are very ancient, and it is located in the heart of the region, at the foot of the Gran Sasso mountain. From a steep and spectacular staircase that crosses the entire village, many alleys branch off, between palaces, chapels and porches of the Renaissance. Navelli is one of very few places in Italy that grows the famous saffron of the L’Aquila province.

A recipe that combines two Navelli excellences is ceci e zafferano (chickpeas and saffron). The tiny chickpeas that grow here are among the tastiest you can find and the saffron is the finest in the world - a true ‘gold’ cultivated here since the 13th century. The result of this mix is an aromatic soup, to which a festival is dedicated each August. 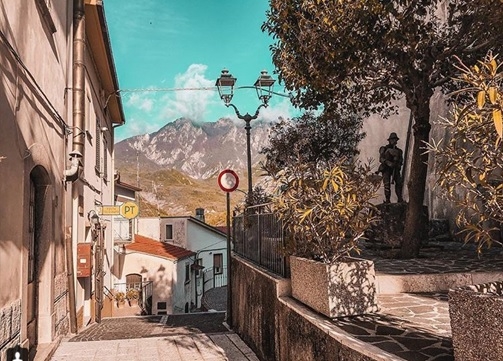 This borgo that almost touches the mountains is famous for the zampogna tradition. The typical wind instrument has farming origins and here it is still made using handcraft methods by numerous ateliers. In the town you will also find a museum dedicated to the borgo. These is an annual festival celebrating the zampogna, celebrated at the end of July each year.

The ravioli scapolesi are traditional big dumplings prepared for the carnival celebrations. The rich filling is made with dry, aromatised sausage with cumin and fennel, pancetta and guanciale, wild chard, potatoes, egg, and goat and cow cheeses. They are seasoned with tomato sauce to flavour the meat and are served with grated cheese on the top. 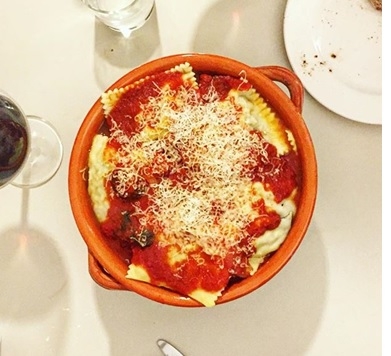 The south of Italy offers some of the best and mosy famous dishes in the world, with many becoming i...

Every region in Italy has a few ancient borghi, which are small, medieval villages, all fortified an...

Italian salaries from north to south

It might be a good idea to have a look at the average salary per region and per city in Italy before...